This is a China tea blend, to which we have skillfully added Mango and Apple flavouring. Created with that special occasion in mind, The Chelsea Flower Show.

The Chelsea Flower range has been inspired by the historic association between flowers and nurseries and the Royal Borough of Kensington and Chelsea.

As far back as the 17th century, nurseries were to be found in Chelsea catering for fashionable tastes in exotic and beautiful flowers.  James Colville, a leading nurseryman and florist noted for his roses, chrysanthemum, pelagoniums and rare exotics, was located on the corner of Blacklands Terrace and Kings Road, directly opposite the current location of Partridges' Chelsea store.  Over time, Chelsea became famous for its numerous nurseries which imported and grew wonderous plants and flowers such as azaleas, camellias and geraniums alongside fruits including oranges and pineapples.

Today Partridges continues that association with the Chelsea Flower range of teas, biscuits, fudges, and jellies. 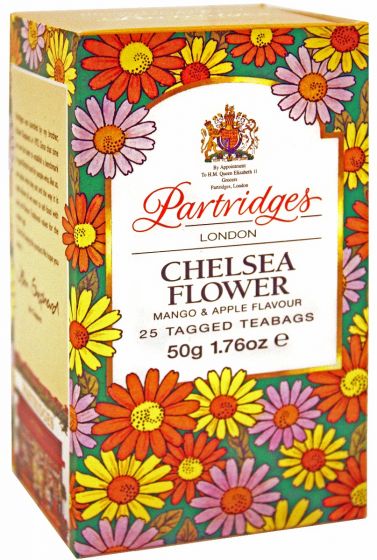 Related Products
Check items to add to the cart or
We found other products you might like!